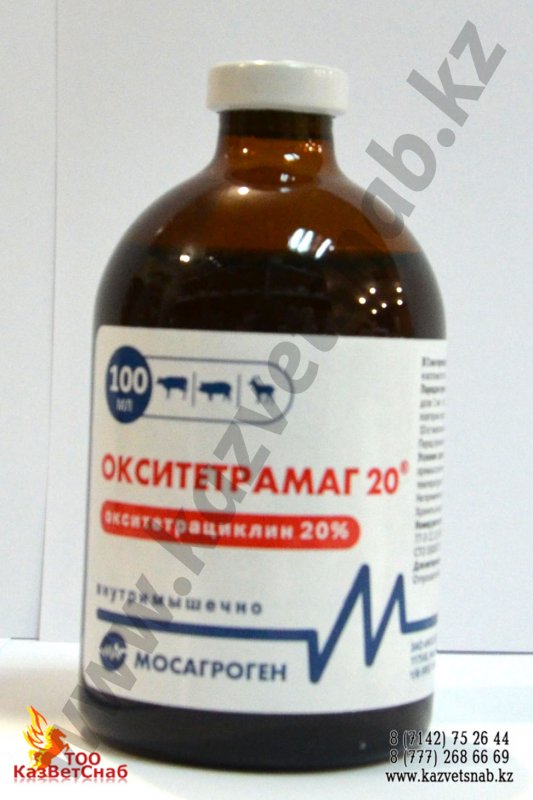 The oxytetramagician 20® - medicinal antibacterial drug of the prolonged action. Drug contains in quality of active ingredient 200 mg/ml of Oxytetracyclinum of a hydrochloride, and also auxiliary components and water for injections.

Drug is let out in the form of solution for injections, packaged on 5, 10, 20, 50 and 100 ml in the glass bottles of the corresponding capacity corked by rubber bungs and rolled by aluminum caps.

Apply the name of the manufacturing organization, its address and the trademark, the name of drug, volume in ml, the name and content of active ingredient, number of a series, a period of validity, storage conditions, a route of administration on each unit of packing, to a text "For animals", "Sterilely", and supply designation of the standard of the organization with the application instruction.

Store drug with precaution (list B) in the dry, protected from light place at a temperature from 5 °C to 25 °C.

Oxytetracyclinum a hydrochloride - the antibiotic of tetracycline group produced by Streptomyces rimosus possesses a wide range of antibacterial action, suppresses growth and development of the majority of gram - positive and gram - negative microorganisms, including escherichias, salmonellas, stafilokokk, streptococci, pasterell, clostridiums, aktinobakteriya, and also rickettsiae and some types of mycoplasmas and protozoa.

The mechanism of bacteriostatic action of Oxytetracyclinum of a hydrochloride is based on protein synthesis suppression by a microbic cell (blockade of function of ribosomes).

After intramuscular introduction of the Oxytetramagician 20® Oxytetracyclinum the hydrochloride is quickly soaked up in blood. The maximum concentration of an antibiotic in blood is reached in 60 minutes and keeps for 12 hours, therapeutic concentration remains not less than 72 hours. The antibiotic is brought out of an organism mainly with urine and bile, at the lactating animals - partially with milk.

The oxytetramagician 20® on extent of impact on an organism treats moderately dangerous substances (the 3rd class of danger in accordance with GOST 12. 1. 007 - 76).

The oxytetramagician 20® appoint to pigs, cattle and sheep for treatment of acute and chronic diseases of a respiratory organs, urinogenital system, a musculoskeletal system, a kolibakterioz, a salmonellosis, pasteurellosis, a gastroenterocolitis, mastitis, operational, wound, puerperal and other primary and consecutive infections of a bacterial etiology which activators are sensitive to tetracyclines.

At drug use to pigs weighing less than 10 kg the maximum single dose of the Oxytetramagician 20® makes 1 ml on an animal.

At administration of drug in the volume exceeding for cattle - 20 ml, pigs - 10 ml, sheep and calfs - 5 ml, injections should be carried out to several places.

In an injection site of drug emergence of local reaction in the form of hypostasis which disappears in several days without use of therapeutic means is possible; at some animals allergic reactions are possible.

In case of an acute anaphylaxis an animal appoint adrenaline, corticosteroids and antihistaminic drugs according to instructions for their use.

Contraindication to use of the Oxytetramagician 20® is individual hypersensitivity of an animal to antibiotics of tetracycline group.

Use of the Oxytetramagician 20® is not recommended to dogs, cats and horses, animals with a renal failure, to young growth during development of teeth, and also to females of pregnancy in recent months.

It is not necessary to use drug along with corticosteroids and estrogen, and also in view of the expressed decrease in antibacterial effect of Oxytetracyclinum, together with bactericidal drugs.

Slaughter of pigs, cattle and sheep on meat is allowed not earlier than in 21 days after the last use of drug.

Meat of animals, by force killed before the expiration of the specified term, can be used after heat treatment for feeding of fur - bearing animals or production of meat and bone meal.

Milk of milch animals during treatment and within 7 days after the last introduction of the Oxytetramagician 20® is forbidden to be used in the food purposes. Such milk can be used after heat treatment for feeding of animals.

The oxytetramagician 20® it is necessary to store in the places unavailable to children.