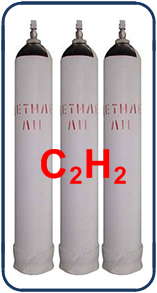 64% of positive reviews from 39
8
8 years on Allbiz
Description
Acetylene represents colourless gas with an unpleasant smell.

Melting temperature is-81,8 °C. Passing a liquid state, acetylene passes from gaseous into firm at once. Possesses narcotic action. At long inhalation can make dizziness, sick. Also can lead to poisoning. Poisoning is caused at the expense of the phosphorous hydrogen which is contained in acetylene. Inhalation of the air containing more than 5% of this gas causes asthma.
Acetylene mix with air is explosive. Acetylene mix with pure oxygen burns down at a temperature of 3050-3200 °C. Combustion is followed by a bright luminescence of a flame which was used for lighting in recent times. The lamp containing acetylene gave in 15 times more of light, than gas lamps.
This gas is well soluble in acetone (about 25 liters on 1 liter of acetone).

Acetylene has been for the first time received in 1836 by impact of water on potassium carbide. In those days acetylene was quite difficult to be got, and its cost was quite high, the way of receiving calcium carbide by calcinating of coal and unslaked lime has not been open yet. The method of receiving acetylene from methane (thermooxidizing cracking of natural gases) is at the moment widespread. Receiving by a transmission of this gas through a voltova an arch is also possible.

Acetylene is applied in metallurgical industry thanks to above-mentioned, extremely high temperature of combustion, namely to cutting and welding of different metals. Also this gas is used for industrial organic synthesis.
By means of acetylene receive such substances as: rubber, ethyl alcohol, solvents, acetic acid etc.