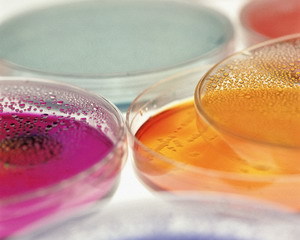 The agar-agar is the strongest zheliruyushchy substance surpassing usual gelatin in tens of times, and also it is considered a soft depletive

The agar-agar represents plates or the white-yellowish powder forming at interaction with hot water jellylike jelly. This product is received by means of extraction from brown and red seaweed of the Pacific Ocean and the White Sea. Therefore an agar agar always today the USA (California) and Japan were and remain world leaders in production and export. This strongest vegetable substitute of gelatin in our country it is accepted to call just an agar and to divide into two grades: light or white the highest and dark yellow the first.

The agar is obliged by a wide circulation in various areas of human activity to the interesting physical and chemical properties: it is completely dissolved in water at a temperature about 100 °C and turns into strong thermoreversible gel when cooling solution to 40 °C, that is transitions from a liquid state to dense can repeatedly be carried out. This substance was for the first time described in 1884 by the German microbiologist V. Hesse as a nutrient medium for growth and reproduction of bacteria, but the idea of such application an agar agar was suggested to it by own wife using a product for the culinary purposes. In Ukraine and Russia yellowish powder is known as a food additive of E406 which due to the lack of negative impact on an organism has practically no quantitative limit and is added to various foods according to a compounding as the stabilizer, a thickener and a zheleobrazuyushchy component.

Most in large quantities the agar-agar is applied in production of confectionery (fruit jelly, a fruit candy, a souffle, a zephyr, jam, confiture, a stuffing to candies), and also at production of fruit, vegetable, fish and canned meat, ice cream, mayonnaise, condensed milk, bakery products, chewing gum, beer and the clarified drinks. Owing to low caloric content the raw materials are used in preparation of diabetic production, and its chemical properties cause its application in pharmaceutics, microbiology and cosmetology.