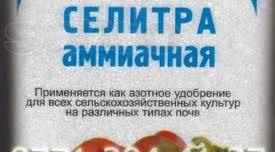 Ammonium nitrate after entering into the soil is dissolved, ammoniyny nitrogen is absorbed by the soil as a result of exchange reactions, nitrate nitrogen enters interaction with cations of soil solution. In the podsolic soils which are characterized by insufficient quantity of cations in solution acidulation of the soil can be observed at the same time. The Ammoniyny part of saltpeter can be nitrified that also causes acidulation of the environment. On chernozem and other soils of a neutral and alkaline row such phenomenon is not noted.