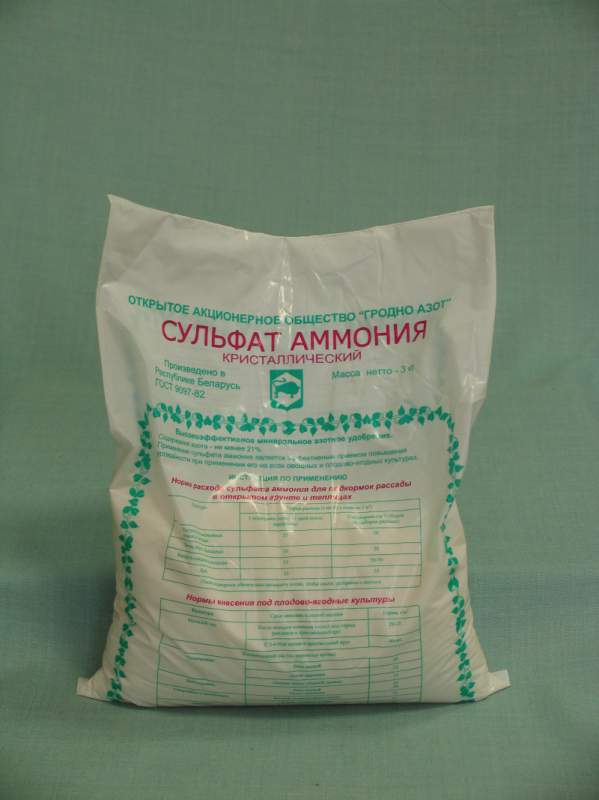 Colourless crystals. Let's well dissolve in water, it is insoluble in acetone, ethanol and ether.


This reaction, as well as all other reactions of interaction of ammonia with acids, are carried out in the device for receiving soluble substances in firm look.

Among the main ways of receiving ammonium sulfate which are most often used in chemical industry there is following: process of neutralization of sulphuric acid synthetic ammonia; use of ammonia from gas of coke furnaces for its chemical change with sulphuric acid; receiving as a result of gypsum processing by ammonium carbonate solutions; receiving at waste treatment, remaining after production of caprolactam. At the same time there are also other ways of production of ammonium sulfate, for example, receiving this substance from combustion gases of power plants and sulphuric acid plants. For this purpose enter gaseous ammonia which connects the sulfur oxides which are available in gas in different salts of ammonium including in ammonium sulfate into hot gases.

Apply as fertilizer, in production of viscose fiber. In biochemistry reprecipitation by ammonium sulfate is the general method of purification of proteins. In the food industry it is registered as food additive of E517.

It is used in technology of chlorination of water with ammoniation, entered into the conditioned water several seconds prior to chlorine, with chlorine forms chlorammines — connecting free chlorine thanks to what formation of chlororganic chemistry harmful to human body is considerably reduced, the chlorine consumption is reduced, corrosion of pipes conduit decreases. Also it is used in receiving manganese by electrolysis.

Ammonium sulfate (ammonium sulfate), formula (NH4)2SO4 — nitrogen-sulfur fertilizer (in the Russian Federation — GOST-9097-82). Ammonium sulfate contains 21% of nitrogen and 24% are gray. It is chemically neutral crystal salt of white color, well soluble in water. Hygroscopicity its weak therefore at prolonged storage it does not slyozhivatsya and keeps flowability.

Nitrogen and sulfur — the most important nutrients of crops: they are part of proteins and amino acids.
Similar company products
Contact the seller
Ammonium sulfate, ammonium sulfate, fertilizer