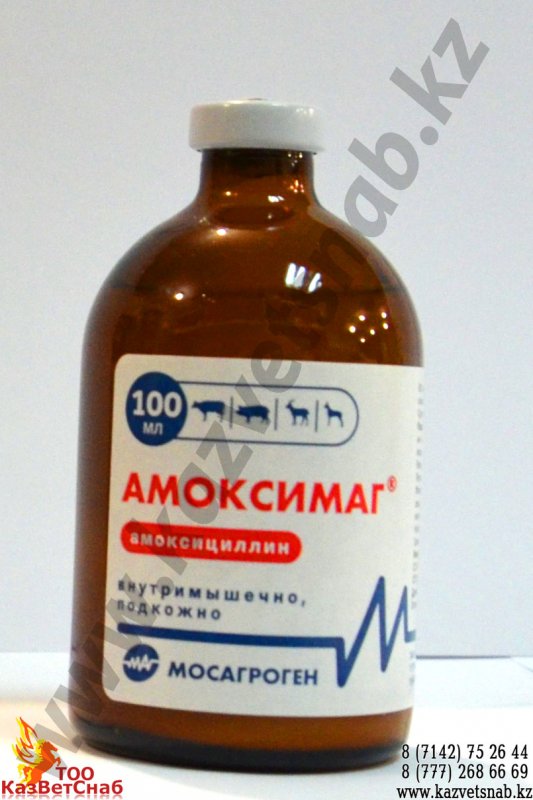 Trade name of medicine: Амоксимаг® (Amoximag). Амоксимаг® contains in 1 ml as active ingredient amoksitsillin - 150 mg, and also auxiliary components. Амоксимаг® let out in the form of suspension for injections. A preparation expiration date at observance of storage conditions in the closed packing of the producer - 2 years from the date of production. Storage of a preparation after opening of a bottle is not provided. Application after an expiration date is forbidden.
Store medicine in the closed packing of the producer in dry, protected from light, the place, inaccessible for children, separately from food and forages, at a temperature from 5 °C to 25 °C. Special precautionary measures at destruction of unused medicine and a preparation expired are not required.

Амоксимаг® - an antibacterial preparation of the prolonged action of group of penicillin. Amoksitsillin who is a part of medicine possesses a wide range of bactericidal action concerning grampolozhitelny (Actinomyces spp. , Bacillus anthracis, Clostridium spp. , Corynebacterium spp. , Erysipelothrix rhusiopathiae, Listeria monocytogenes, Staphylococcus spp. , Streptococcus spp. ) and gramotritsatelny microorganisms (Actinobacillus spp. , Bordetella bronchiseptica, E. coli, Salmonella spp. , Fusobacterium spp. , Haemophilus spp. , Moraxella spp. , Pasteurella spp. , Proteus mirabilis). Pseudomonas does not affect penitsillinazoobrazuyushchy strains of microorganisms from the sorts Klebsiella and Enterobacter, and also. The mechanism of bactericidal action of an antibiotic consists in violation of synthesis of the mukopeptid which is a part of a cellular wall of microorganisms by inhibition of enzymes of a transpeptidaza and a karboksipeptidaza that leads to violation of osmotic balance and destruction of a bacterial cage. At parenteral application it is well soaked up from the place of introduction and gets into the majority of bodies and animal tissues. The maximum concentration in blood is noted in 2 hours and keeps at the therapeutic level not less than 48 hours after application. Communication with proteins of plasma makes 17 - 20% . In small degree it is capable to get into a brain and bone liquid, except for cases when the brain cover is inflamed. It is allocated from an organism mainly with urine and partially with bile, generally in not changed form.

Амоксимаг® on extent of impact on an organism treats moderately dangerous substances (the 3rd class of danger according to classification of GOST 12. 1. 007 - 76).

Амоксимаг® appoint for treatment of cattle, sheep, goats, pigs, dogs and cats at infectious diseases of a digestive tract (including enteritis, a gastroenteritis, enterokolit), airways (including bronchitis, pneumonia, bronchial pneumonia, rhinitis), urinogenital system (including a metritis, mastitis, cystitis, an endometritis, uretrit, pyelonephritis), surgical infections (including wounds, abscesses, inflammations of joints), diseases of skin and soft fabrics (including umbilical infections), atrophic rhinitis, a syndrome the mastitis - metritis - agalaxia and other primary and secondary infections of a bacterial etiology which causative agents are sensitive to an amoksitsillin Contraindication to application of a preparation is individual hypersensibility of an animal to antibiotics of group of penicillin. Do not apply at the infections caused by penitsillinazoobrazuyushchy microorganisms. Амоксимаг® apply an animal once intramuscularly or hypodermically in a dose of 1 ml on 10 kg of mass of an animal (15 mg of active ingredient on 1 kg of body weight). If necessary repeatedly apply a preparation in 48 hours. For animals with a renal failure it is recommended to verify a preparation dose precisely. In case the entered dose of a preparation exceeds 20 ml, it is recommended to enter it several injections into different points. After introduction of a preparation it is recommended to mass the place of an injection. Before application the bottle with medicine needs to be stirred up carefully before receiving uniform suspension. Overdose symptoms at animals are not revealed. Features of effect of medicine at its first application and cancellation it is not established.
It is necessary to avoid the admission of the next dose of a preparation as it can lead to decrease in therapeutic efficiency. In case of the admission of one dose application of a preparation is resumed in the same dosage and according to the same scheme. At application of Amoksimaga® according to the present instruction of by - effects and complications, as a rule, it is not observed. In rare instances at certain animals on the place of an injection development of hypostasis which resolves spontaneously within 1 - 2 days is possible. At the increased individual sensitivity of animals to an amoksitsillin and developments of allergic reactions stop use of a preparation and appoint to an animal antihistaminic and symptomatic means. At treatment of animals it is not necessary to apply Amoksimag® along with tiamfenikoly, chloramphenicol, antibiotics of group of penicillin, a tsefalosporinama and a ftorkhinolonama, and also to mix it in one syringe with other medicines. Slaughter of animals on meat is allowed not earlier than in 14 days after the last application of Amoksimaga®. Meat of animals, forcedly killed before the expiration of the specified term, can be used for feeding of fur animals. Milk of milch animals is allowed to be used for the food purposes not earlier than in 48 hours after the last introduction of medicine. The milk received earlier established period can be used after boiling in a forage by an animal.
PRECAUTIONARY MEASURES During the work with Amoksimagom® it is necessary to follow the general rules of personal hygiene and safety measures provided during the work with medicines. At casual hit of a preparation on skin or his mucous membranes it is necessary to wash away immediately a stream of flowing water. Use of empty bottles from under medicine for the household purposes is forbidden, they are subject to utilization with household waste.