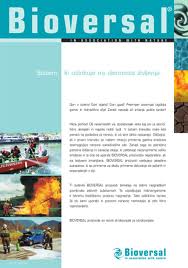 In stock
Reconfirm the price with seller
Eko Servis Proekt Aziya, TOO
Kazakhstan, Atyrau
(View map)
Call
Products of other enterprises
Description
The BIOLOGICAL PRODUCT of "BIOVERSAL" (BIOVERSAL) Within 10 years of test of the German biological product Bioversal was carried out by 12 authoritative research institutes and public institutions of Europe and Asia on the basis of which certificates on Bioversal's application in quality are granted: - The deactivator at oil spills and oil products on reservoirs and soils, highways at accidents, in tunnels, on railway lines - the fire-prevention means allowing quickly (is 5 times faster than fire protection regulations) safely for environment and the person to extinguish the fire. Protection of reservoirs and soils against spill of oils, oil and oil products: * interferes with leak of toxic agents because of the oil or oil capsules created by it, it toxicity of oils for microorganisms decreases, and also "sticking" of pollution to solid materials stops. The formed capsules do not settle, and remain on a water surface; in soils capsulation of petropollution in addition allows oxygen to get freely on depth necessary for effective activity of microorganisms. * the size of a contact surface of pollution to surrounding water is multiplied by 100 000 times therefore microorganisms are provided much more the area for biological disintegration. * stimulates growth and reproduction of the present microorganisms by means of the bioactivator which is switched on Bioversal in structure which is received also plant material and as all other components of Bioversal is biologically completely breaking up. * during process of disintegration (splitting) of pollution Bioversal is also split by microorganisms as it serves for them as nutrient. It is important to note that final products of process of splitting by means of Bioversal are water and carbon dioxide which are completely harmless to environment. From 10 to 40 days a donkey of processing pollution are completely liquidated.
Contact the seller
Bioversal, means, for cleaning, pourings. oil products.

We recommend to see
Materials for chemical spills liquidation
Materials for liquidation of petroleum products spills
Send inquiry
Buy
Contact supplier
Your question has been sent successfully
Consultants of the shop typically answer questions during the day.