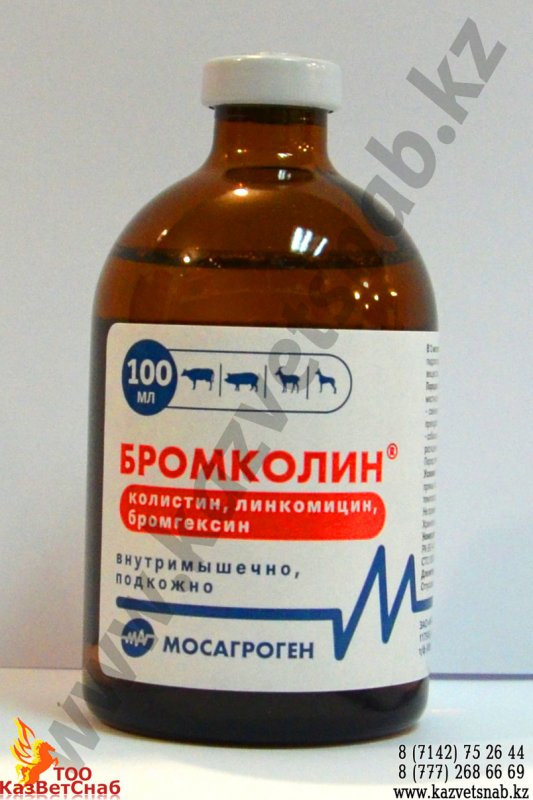 Bromkolin of 100 ml for injections

I. General information
Бромколин - ®(Bromcolin®) - the medicine containing in quality of active ingredients of lincomycin a hydrochloride, a kolistin sulfate and Bromhexine a hydrochloride.
Represents transparent liquid of light yellow color.
The preparation is let out in the form of solution for oral application, packaged on 100 ml in glass bottles. Bottles cork rubber traffic jams, strengthen aluminum caps.
Each bottle is marked with the instruction: the manufacturing organization, its address and the trademark, the name of medicine, the name and content of the active ingredient, a method of application, number of a series (including date of production), an expiration date, preparation volume in a bottle, storage conditions, the inscription "For Animals", designations of the standard of the organization also accompany with the instruction for application.
Store a preparation in the closed packing of the producer separately from forages and foodstuff in dry, protected from light, the place, inaccessible for children, at a temperature from 5 °C to 25 °C. An expiration date at observance of storage conditions - 1 year from the date of production. After opening of bottles the remains of a preparation utilize in accordance with the established procedure. It is forbidden to use medicines after the termination of term of its validity.
II. Pharmacological properties
Lincomycin possesses antimicrobic action, showing the greatest activity concerning the majority of grampolozhitelny mikroogranizm, including stafilokokk, streptococci, pneumococci, klostridiya, korinobakteriya, and also mycoplasmas. It is active concerning microorganisms, especially the stafilokokk steady against other antibiotics. Does not affect gramotritsatelny bacteria, mushrooms and viruses. The mechanism of action is connected with a podaleniye of synthesis of protein in microbic cages. The maximum concentration of an antibiotic in blood is reached in 1 hour. Therapeutic concentration remains for 24 hours. Lincomycin gets into all bodies and body tissues, including a bone tissue.
Kolistina sulfate is included into group of polimiksin. Works only against gramotritsatelny microorganisms, has bactericidal effect. Kolistin, contacting phospholipids of a cytoplasmatic membrane of a bacterial cage, increases its permeability that leads to destruction of a cage. It is to the same extent active, as concerning the breeding cages and being at rest. It is removed mainly with excrements. Antibacterial activity of a kolistin extends to Escherichia coli, Klebsiella spp. , Enterobacter spp. , Salmonella spp. , Shigella spp. , Haemophilus spp. , Brucella spp. , Pseudomonas aeruginosa.
The combination of antibakterialnykhkomponent of a preparation possesses synergy action. The acquired bacterial resistance develops very slowly.
The Bromhexine which is a part of a preparation renders mukolitichesky (sekretolitichesky) and expectorant action. Reduces viscosity of a bronchial secret thanks to what the spontaneous otkhozhdeniye of a phlegm is facilitated. Bromhexine does not possess proteolytic action thanks to what prevents damage mucous bronchial tubes. The mechanism of action is caused by a depolymerization of mukoprotein and mukosakharid therefore viscosity of a bronchial secret decreases. At intramuscular introduction it is completely soaked up in 30 minutes. Bioavailability makes 80% owing to passing through a liver. Bromhexine gets through a gematoentsefalichesky and placentary barrier. It Ekskretirutsya by kidneys.
The preparation is especially active against a sinegnoyny stick and at a septitsemiya. Before application it is necessary to check sensitivity of activators to lincomycin and a kolistin. A preparation malotoksichen for warm - blooded animals. In the recommended doses, does not render the local irritating and sensibilizing action.
III. Indications
The preparation is applied at the gastrointestinal infections caused: E. coli, Pseudomonas aeruginosa, Haemophilus spp. , Salmonella spp. , Pasteurella, Staphylococcus spp. and Streptococcus spp. , Enterobacter spp. , and also at the respiratory diseases caused by grampolozhitelny aerobic bacteria: Staphylococcus spp. Streptococcus spp. , including Streptococcus pneumoniae (except for Enterococcus faecalis), Corynebacterium diphtheriae; anaerobic sporoobrazuyushchy bacteria of Clostridium spp. and also gramotritsatelny anaerobic bacteria: Bacteroides spp. , Mycoplasma spp. , followed by formation of the hardly separated viscous secret: chronic pneumonia, bronchitis, trakheobronkhit, etc.
The preparation is applied intramuscularly in the following doses:
- young growth of KPC and MPC, a pig – 1 ml on 10 kg of weight daily within 5 days:
- dogs, cats – 2 ml on 10 kg of weight daily within 3 - 7 days

It is not recommended to apply a preparation an animal with a renal failure and the affected liver. It is not necessary to apply along with aminoglycosides (gentamycin, Neomycinum), and also with miorelaksant and anesthetics (threat of development of paralysis of respiratory muscles).
As contraindication to application serves the heavy renal failure, pregnancy, a lactation and individual hypersensibility of animals to preparation components.
Slaughter of animals on meat is allowed not earlier than through the 7th days after phase - out of a preparation. Meat of animals, forcedly killed before the expiration of the specified term, can be used for feeding of fur animals after heat treatment or production of meat and bone meal.
VI. Precautionary measures
During the work with the preparation Bromkolin® it is necessary to follow the general rules of personal hygiene and safety measures provided during the work with medicines for animals.
Use of empty bottles from under a preparation for the household purposes is forbidden.