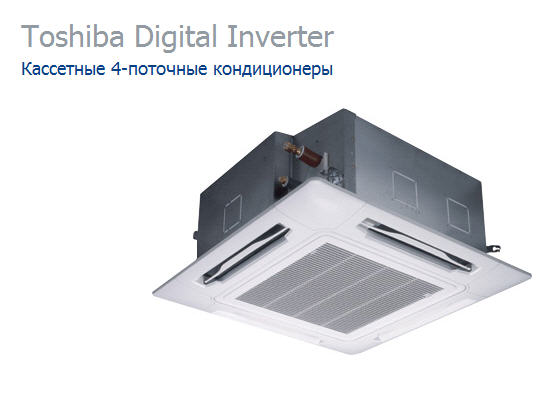 
Cassette internal blocks are intended for installation in a false ceiling. They are imperceptible and do not take the place indoors. Cassette Toshiba Super Digital Inverter conditioners have the maximum energy efficiency (to 4,67) and low noise level (from 27 dBA). All cassette Toshiba conditioners are made in Japan.

Connection of 2, 3 or 4 internal blocks of cassette type to one external Digital Inverter block is possible. In 2009 cassette conditioners new 4 series, with the improved characteristics began to be delivered to Russia.

Novelty! The powerful SM1604UT-E model with a refrigerating capacity of 14 kW appeared in warehouses of distributors of Toshiba in Moscow.

Cassette Toshiba blocks do not pollute a ceiling

At a usual design of the cassette block the air rising up can spread on a ceiling surface, polluting it.

In cassette conditioners of Toshiba air goes from top to bottom, keeping a surface of a ceiling of pure.

Elements of the cassette Toshiba conditioner subject to pollution (the gate and lattice) can be removed and washed up easily. For maintenance of a lattice and the gate in purity it is enough to wash out of them water