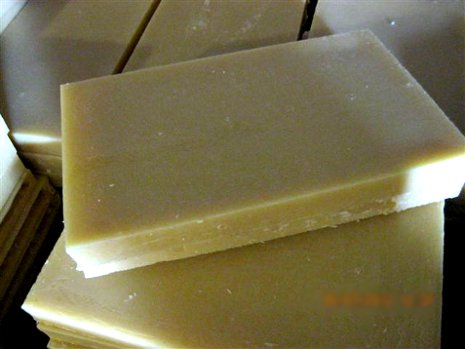 On structure ceresin represents mix of saturated hydrocarbons with number of carbon atoms in molecule from 36 to 55. Receive ceresin from oilstock, generally from petroleum butter (mix of ceresin, paraffin and petroleum oils) and ozokerite. Also ceresin synthetic is made.

Externally ceresin looks as waxy substance from white till brown color, in water and ethanol is not dissolved, dissolved in benzene. Temperature of melting is 65 — 88 °C. Depending on the melting temperature (drop falling temperature) there are 65, 70, 75 and 80 brands. Now in the territory of Russia the brand of 75 ceresin is issued

Ceresin generally as component is applied to production of alloy for candles, plastic greasings, insulating material in radio - and electrical equipment, impregnation for packing materials, as a part of pitch, phlegmtizator for explosive substances. Specially cleared grades of ceresin apply in the cosmetic and food industry.