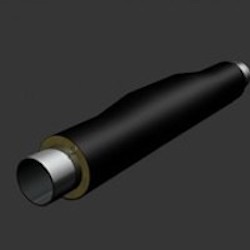 Compensation devices the isolated PPU are one of the most important elements of pipelines. Such products on beskanalny, land or underground pipelines are established. As well as other elements, compensators are issued in PE or OTs to a cover.

Because of differences of temperatures, there is a considerable expansion of the pipeline on an axis. PPU compensators compensate all changes of geometry of the pipeline and, thus, prevent the shift of pipes, their deformation and destruction.

The PPU compensator is executed from the bellow valve and branch pipes. As well as other elements, compensators have a protection galvanized cover with PPU isolation. The bellow valve is the corrugated cover consisting of several layers. The main feature of the bellow valve is its ability to contract, stretch, be bent in various directions, and also to give in to cross deformation - the detail reliably compensates deformations with pipe shift to several centimeters in any directions. Uniform installation of compensators on all length provides high flexibility and reliability of pipelines.