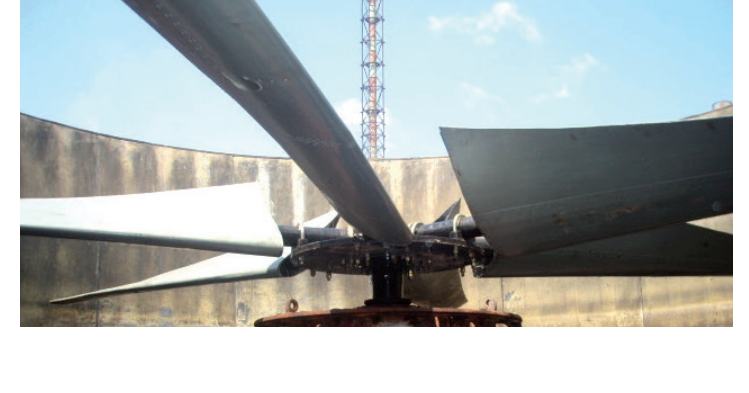 
Driving RKV-50, RKV-70 wheels for fans of the coolers VG-70 are offered your attention. RKV-50, RKV-70 and HK-50, HK-70 driving wheels (the previous development) work from 2000th year at tens of the enterprises of Ukraine, Russia, Belarus. Main goals at design of RKV blades: • increase in productivity of the fan; • decrease in electricity consumption due to their maximum aerodynamic efficiency; • high reliability at long, not less than 10 years, continuous operation.
Depending on needs of the customer RKV driving wheels can be ukomplek-tovana various number of blades - from the 3rd to 8. The smaller number of blades will be optimum both for coolers with a low thermolysis, and at limited financing. Subsequently, for increase in an air stream of the fan and increase in a thermolysis of the cooler, for - the kazchik will not need to buy the new driving wheel, and only to buy additional blades. A settlement resource at design — 10 years nepre-ryvny operation. Now the driving wheels installed in 2002nd and 2003rd work for some before - priyatiya. Blades and a nave come to the customer statically balanced. The measurements executed on nekoto-the ry plants showed that vibrospeed level, zamerya-a hole on the engine, does not exceed 2,7 mm/sec. at maksimal-the ny angles of installation of blades. In the 2005th year on JSC Azot, Berezniki measurements of vibration of the ton beams bearing be-under the fan electric motor were executed, having shown - shy values of the vibrospeed of 0,64 mm/sec. Use of narrow blades allows - to raise not roofing felt their aerodynamic efficiency (or as go-cook in aircraft, aerodynamic quality), but also reduces impact of an air stream on the diffuser and its fastening. It reduces vibration impact on a framework of the cooler and prolongs the term of its service. Separately it should be noted that for the 6-bladed fan of the cooler VG-70 the vibration caused by aerodynamic influence has the increased frequency close to 18 Hz, more remote from own frequencies of the cooler. It, in turn, eliminates risk of a resonance of a design that it is especially urgent for old coolers. The design of the driving wheel does not provide performance of any works after launch of the fan in operation, except periodic surveys. Warranty period of operation of the driving wheel 24 months. At installation frequency go the converter in an electric motor power-supply circuit the warranty period increases and makes 36 months. A settlement resource of power elements of the driving wheel - 100 000 hours. Settlement productivity of the PKB-70/6 driving wheel with a diameter of 6890 mm, it is established - the leg on the 75 kW electric motor with a frequency of rotation of 176 rpm makes not less than 1,5 million m ³ / hour. The actual measurements made on PJSC Crimean Soda Plant, Krasnoperekopsk showed big values (Acts are attached) at the angle of installation of blades of 39 degrees and the consumed current 178 A (the rated consumed current of the electric motor 199 A). At reduction of an angle of installation to 32 degrees, the consumed current decreased to 128 A. For customers with individual requirements modifications of driving wheels for the purpose of optimization of parameters of the fan are offered: 1. Three - or the four-blade PKB-70/3-45 (PKB-0/4-45) driving wheel for installation on the ACBO-45-32 electric motor (45 kW, 380B, 187,5 rpm). As show calculations, a cart - the stuffy stream of such fan will be not less passport - 1,1 million cubic m/hour at znachi-telno smaller expenses of the electric power. In 2005 on the cooler VG-70 of JSC Himvolokno, Cherkasy the fan with the 3kh-bladed XK-70/3 driving wheel (the previous development of 2002) installed on the BACO-30-32 electric motor with a power of 30 kW at 187 rpm was tested. The executed measurements showed an air stream of 1,04 million m ³ / hour (94% of a passport stream) at the consumed current 80A (rated current of the engine 99A).
2. The six-blade PKB-70/6 driving wheel with the ACBO5K-55-32 electric motor of powerful Stew of 55 kW with a frequency of rotation of 187,5 rpm. Use of such fan at is increased - the number (against passport) an air stream assumes annual economy of the electric power on - a row of 150 thousand kvt*chas (at 90% to loading) the Payback period of the driving wheel - less than a year.
3. The eight-bladed PKB-70/8 driving wheel for installation on electric motors moshch-a nost of 75 and 90 kW for providing the maximum air stream. The settlement cart - a stuffy stream makes not less than 1,7 million m ³ / hour for the frequency of rotation of 176 rpm and 1,84 million m ³ / hour for the frequency of rotation of 187,5 rpm.
Similar company products
Contact the seller
Driving RKV-50, RKV-70 wheels for fans of the coolers VG-70