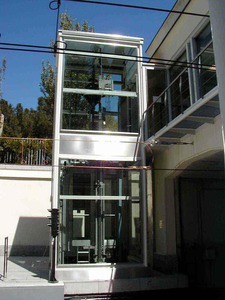 In stock
Reconfirm the price with seller
Seller
Liftinvest, TOO
Kazakhstan, Almaty
(View map)
Call
Products of other enterprises
Description
In 1996 the KONE company considerably caused a stir in the field of production of elevators, having released the elevator without machine room of KONE MonoSpace with the bezreduktorny EcoDisc drive. Installation will not require an additional superstructure any more, thanks to the KONE EcoDisc drive which compactness allows to place the equipment, directly in mine that considerably will save time and space.

The revolutionary KONE EcoDisc drive weighs twice less than the traditional reduktorny drive but at the same time it exceeds productivity of the traditional equipment approximately twice. Besides the winch does not demand oil replacement - IT is not THERE! At such drive productivity than at the hydraulic power block is three times higher, and the economy of the electric power makes 40% that allows to cut down annual expenses on operation, at least for a half.