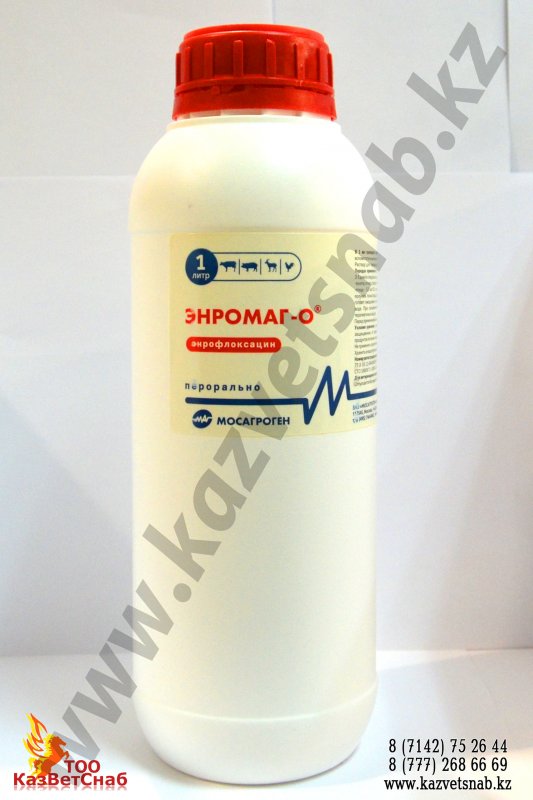 Drug is let out in the form of 10% of solution for oral use packaged on 100 ml in glass bottles or on 0, 5; 1, 0 l in polyethylene canisters of the corresponding capacity. Bottles cork rubber bungs and strengthen aluminum caps. Polyethylene canisters close carving plastic covers with control of the first opening.

Each bottle (canister) is marked with the instruction: the manufacturing organization, its address and the trademark, the name of medicine, the name and content of active ingredient in % , a route of administration, number of a series (including date of production), a period of validity, drug volume in a bottle (canister), storage conditions, a text "For animals", designations of the standard of the organization also accompany with the application instruction.

Store drug in the closed packaging of the producer separately from forages and foodstuff in dry, protected from light, the place, unavailable to children, at a temperature from 5 °C to 25 °C. A period of validity at observance of storage conditions - 1 year from the date of production. After opening of bottles and canisters the remains of drug utilize in accordance with the established procedure. It is forbidden to use medicine after the termination of term of its validity.

The enrofloxacin which is a part of medicine belongs to group of ftorkhinolon. The mechanism of effect of enrofloxacin is based on ability to inhibit activity of the enzyme of a giraza providing DNA replication in a bacterial cell. Affects a microbic cell bakteritsidno. It is active concerning gram - positive and gram - negative bacteria of the following types: E. coli, Haemophilus, Klebsiella, Pasteurella, Pseudomonas, Proteus, Bordetella, Brucella, Chlamydia, Enterobacter, Campylobacter, Erysipelothris, Corynebacterium, Staphylococcus, Streptococcus, Actinobacillus, Clostridium, Bacteroides, Fusobacterium, and also mycoplasmas.

At oral use enrofloxacin is well soaked up from a gastrointestinal tract, quickly comes to blood and gets practically into all bodies and fabrics, reaching the maximum concentration in 1, 5 - 2, 0 hours after use, and remains in therapeutic concentration within 24 hours. Enrofloxacin is partially metabolized in ciprofloxacin and emitted from an organism generally with urine.

Энромаг - О® according to classification of GOST 12. 1. 007 - 76 3 classes of danger - substance moderately dangerous belong to substances. In the recommended doses malotoksichen for hematothermal animals.

During treatment animals and a bird have to receive only the water containing medicine. Solution is prepared at the rate of water requirement for 1 days. It is necessary to change medicinal mix each 24 hours.

Энромаг - О® it is impossible to apply together with chloramphenicol, macroleads, tetracyclines, theophylline and non - steroidal anti - inflammatory drugs.

Medicine is not recommended to be applied at hypersensitivity to ftorkhinolona.

Meat of animals (and birds), by force killed before the expiration of the specified term, can be used for feeding of fur - bearing animals or for production of meat and bone meal.

Use of empty bottles and canisters from under drug for the household purposes is forbidden.