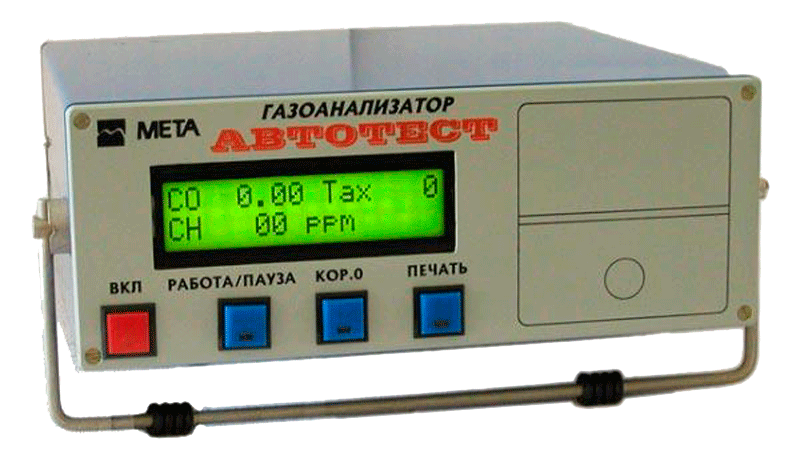 Gas analyzer — the measuring device for definition of qualitative and quantitative composition of mixes of gases. Distinguish gas analyzers of manual action and automatic. Among the first absorbing gas analyzers in which components of gas mix are consistently absorbed by various reagents are most widespread. Automatic gas analyzers continuously measure any physical or physical and chemical characteristic of gas mix or its separate components. By the principle of action automatic gas analyzers can be divided into 3 groups:
The devices based on the physical methods of the analysis including auxiliary chemical reactions. By means of such gas analyzers called volume and manometrical or chemical define change of volume or pressure of gas mix as a result of chemical reactions of its separate components.
The devices based on the physical methods of the analysis including auxiliary physical and chemical processes (thermochemical, electrochemical, photocolorimetric, hromatografichesky, etc.). The thermochemical, based on measurement of thermal effect reactions of catalytic oxidation (burning) of gas, apply mainly to determination of concentration of combustible gases (for example, dangerous concentration of carbon monoxide in air). Electrochemical allow to determine concentration of gas in mix by value of electric conductivity of the solution which absorbed this gas. The photocolorimetric, based on change colors of certain substances at their reaction with the analyzed component of gas mix, apply mainly to measurement of microconcentration of toxic impurity in gas mixes — hydrogen sulfide, nitrogen oxides, etc. most widely use Hromatograficheskiye for the analysis of mixes of gaseous hydrocarbons.
The devices based on purely physical methods of the analysis (termokonduktometrichesky, densimetrichesky, magnetic, optical, etc.). Termokonduktometricheskiye, the heat conductivity of gases based on measurement, allows to analyze two-component mixes (or concentration only of one component, multicomponent on condition of change). By means of the densimetrichesky gas analyzers based on measurement of density of gas mix determine mainly the content of carbon dioxide which density by 1,5 times exceeds density of clean air. Magnetic gas analyzers apply mainly to determination of concentration of the oxygen possessing a big magnetic susceptibility. Optical gas analyzers are based on measurement of optical density, ranges of absorption or ranges of emission of gas mix. By means of ultra-violet gas analyzers determine the content in gas mixes of halogens, vapors of mercury, some organic compounds.