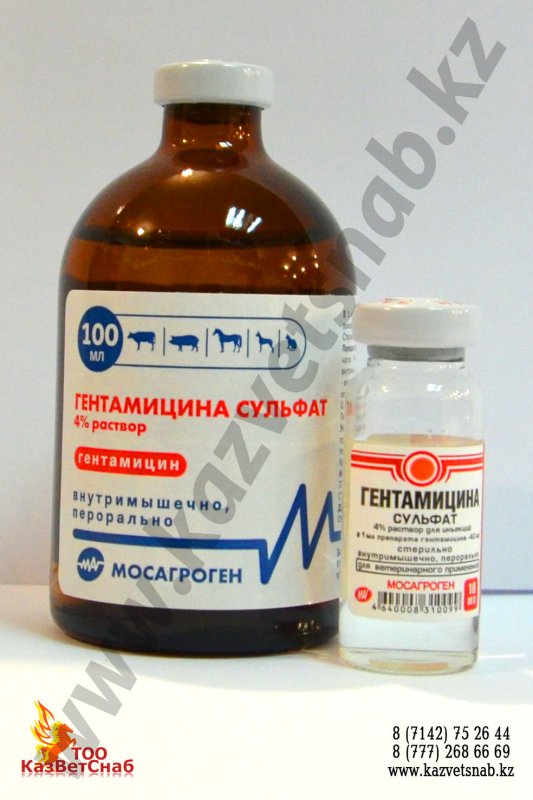 Gentamycini sulfas of 4% solution for veterinary science of 10 ml

Gentamycini sulfas of 4% solution (Gentamicinisulfas of 4% solutio). Gentamycini sulfas of 4% solution – the medicine containing Gentamycini sulfas in quality of active ingredient. 1 ml of drug contains 40 mg of active ingredient, in terms of gentamycin the basis and excipients. By outward drug represents colourless transparent liquid. Let out in the form of solution for injections, packaged on 5, 10, 20, 50 and 100 ml in glass bottles. Each unit of packing is marked with the indication of the manufacturing organization, its address, the trademark, the name of medicine, volume in ml, names and contents of the active ingredient, number of a series (including date of production), storage conditions, a route of administration, texts "For animals", "Sterilely" and supplied with the application instruction. Drug is stored in dry, protected from light, the place, unavailable to children and animals, at a temperature from 5 of 0C up to 25 0C. A period of validity under the specified storage conditions - 2 years from the date of production. It is forbidden to use medicine after the termination of term of its validity. FARMAKOLOGICHESKIYE SVOYSTVA Gentamycin possesses a wide range of antimicrobic action, is active concerning the majority of gram - negative and gram - positive microorganisms, including a protea, escherichias, salmonellas and stafilokokk. The antibiotic does not affect anaerobic bacteria, mushrooms and viruses. At intramuscular introduction drug well gets into many bodies and fabrics. The maximum concentration in blood is reached in 1 hour after introduction. After a single injection therapeutic concentration of an antibiotic in an organism remains for 8 - 12 hours. At use inside drug is practically not soaked up from zheludochno - an intestinal path and has the effect only in intestines within 12 hours. At parenteral administration gentamycin is removed from an organism in not changed view mainly with urine, and at peroral introduction - with excrements. Gentamycini sulfas of 4% solution according to GOST 12. 1. 007 - 76 belongs to the 4th class of danger – substances low - dangerous. PORYADOK PRIMENENIYA PREPARATA solution apply Gentamycini sulfas of 4% to treatment of cattle, pigs, horses, dogs and cats at diseases of a bacterial etiology; respiratory and gastrointestinal diseases, sepsis, peritonitis, meningitis, pyelonephritis and other diseases of the animals called by microorganisms, sensitive to an antibiotic. Drug is used intramusculary or orally by two times a day with an interval of 10 - 12 hours in the doses specified in the table. The species of an animal the Way of introduction the Dose, ml / 10 kg the treatment Term, days Cattle Intramusculary 0, 7 3 - 5 Orally 2, 0 3 - 5 Pigs Intramusculary 1, 0 1 - 3 Orally 1, 5 3 - 5 Horses Intramusculary 0, 6 3 - 5 Dogs, cats Intramusculary 0, 6 3 - 7 is not allowed simultaneous or consecutive use of gentamycin with others from - and nefrotoksichny drugs (streptomycin, Kanamycinum, Neomycinum). Use of drug at heavy renal failures is not allowed. Slaughter of animals on meat at an intramuscular route of administration of drug is allowed not earlier than in 21 days after the last introduction. In case of forced slaughter of animals of earlier established period, meat can be used in a forage to fur - bearing animals or for production of meat and bone meal. The milk received from animals to whom the drug was administered intramusculary is forbidden to be used for the food purposes during treatment and within 72 hours after drug phase - out. Such milk can be used for feeding of animals.