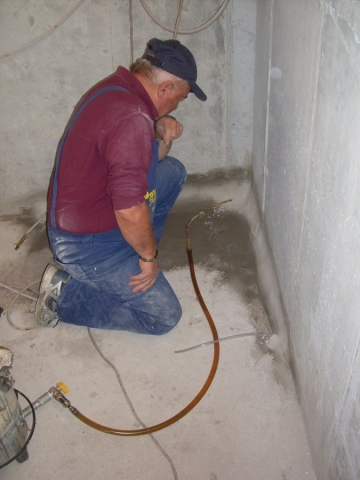 Reconfirm the price with seller
Seller
Pava Resine (PavaResajn), TOO
Kazakhstan, Nur-Sultan
(View map)
Call
Services of other enterprises
Description
The compoundings used for impregnation of walls on condition of a phenomenon of growth of capillary moisture have to possess ability of the return meniscus of water. This turn is carried out only because moisture cannot moisten walls of capillaries.

This phenomenon is based on the principle where height of rising of water in a capillary tube depends on the superficial tension which is present at a surface of the capillary. The good dehumidifier of air has to be made so that considerable decrease in a superficial tension was made and getting deeply into section of all laying and gidrofobiziruya the processed surfaces.

Way of the decision

The mode of actions of a laying of walls is prepared by removal of plaster on height about 40 cm over floor level, thus the barrier to moisture is created. In a wall a number of openings, each of which about 10-18 mm in the diameter, with an interval of 10-20 cm from each other, height of 5-15 cm horizontally (or vertically) over the Earth's surface or a floor becomes above. Depending on bricklaying type, the arrangement of openings changes:

This system consists in input in inside within the walls of PAVAREL or PAVAREL ECO 64 which are entered with a low pressure. Use of pressure, considerably, facilitates dispatch from a time water, promotes penetration of hydrophobic structures.

Let's carry out drillings of openings in close proximity to areas of our activity. Then we will make openings fixed (by means of forks expansion) snuffled, connected to pump system by means of flexible hoses.

The composition was entered into a bricklaying with a pressure about 5-7 atmospheres. Depending on intervention type, injection time usually fluctuates from one to several minutes.

Processing is carried out by alternation of injections of drilling. Thus sections of a wall are processed and depth of composition increases. It works in an impregnation deviation in more and more deep sections.

This procedure allows to puncture a laying not only on the one hand, and and on both sides with a tendency horizontal, vertical or inclined.
Use of system on the basis of Pavareli Pavarel solvents N2onashi laboratories developed the new Pavarel ECO 64 system.
consults to interfere with Pavaseal W.

At the conclusion of various actions it is possible to start check of such area, by carrying out inspections with digital hygrometers in combination with infrared equipment of a termografiya where all areas of intervention and investigation of their efficiency then the test report for testing by the qualified specialist for a work guarantee turns out are compared.