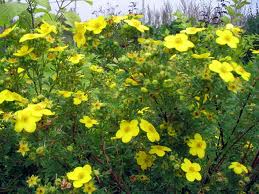 Kuril tea has one more name - Dasiphora (dazifor) that in translation from Greek means "bearing dense hairs". And in the people Kuril tea is often called a silverweed - for a form of leaves. In the nature this plant can be met in the Caucasus, in Siberia, in the Far East, in mountains of Central Asia, in Mongolia, China, Japan, North America, Western Europe. It grows on coast of the rivers, on inundated meadows, in an underbrush of the mountain woods, on rocks and stony slopes, it is high in mountains to the Alpine belt. About 10 species of this plant are known. All listopadny, strongly branching bushes 0,9 - 1,5 m high. The young escapes - trimmed adult - are covered with the grayish - brown shelled bark. Small plumose leaves are often trimmed on both sides silky hairs. The large flowers of various shades of yellow color decorating a plant in the summer are collected in the inflorescences located on the ends of escapes in the form of an umbrella, a brush or a guard. Leaves and flowers of Kuril tea contain a lot of ascorbic acid - several times more, than in lemons and almost as much how many in blackcurrant berries. There is in them even a carotene, and still tannin, flavonoids, organic acids, essential oils, pitches. High activity of Kuril tea against causative agents of intestinal infections, including cholera vibrioes is experimentally proved. It treats dysbacteriosis at children, normalizes a metabolism, is a diuretic, but bed wetting at the same time treats. In addition infusion of Kuril tea relieves of locks, favorably works at a duodenita, cystitis and also as a sedative at a stress. The local population applies infusion of Kuril tea to treatment of wounds, burns, abscesses, furuncles, to rinsing of a mouth and a throat at quinsy, stomatitis and other diseases of an oral cavity.