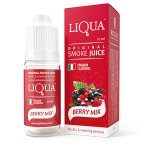 Liquid for gas station of the electronic Liqua cigarettes

In stock
Price:
1300 KZT
Seller
Ciga (Siga), IP
Kazakhstan, Almaty
(View map)
Call
Products of other enterprises
Description
Liquid for the electronic Liqua cigarettes, one of the Most popular liquids for gas station. Faultless quality and appearance. Existence of the certificate of quality of FDA and use of culinary aromas from the most famous Italian producer of FlavorArt.

In existence tens of new and already fallen in love tastes with any content of nicotine.

The description of liquid for the electronic Liqua cigarettes and a popularity rating.

At once we will tell that taste business especially individual therefore the provided information on the basis of our opinion in comparison with popularity at clients.

It is recommended the joye Ego-C, e-Cab or e-Roll cigarettes as the models which are well transferring purity of taste.

Traditional Tobacco Tradishnl Tobakko No. 1 in popularity among tobacco tastes at Liqua.

The name speaks for itself, classical tobacco taste. Pleasant and fragrant. Nothing superfluous, well is suitable for the first acquaintance and for use for every day.

American Tobacco Amerikan Tobbako No. 2 in popularity among tobacco tastes.

Also pleasant aroma which should be tried.

Turkish Tobacco No. 4 for fans to experiment and try new, taste tobacco, but has east or hookah shades.

Vanilla Vanilla. In our opinion the best liquid with taste of vanilla from all producers of which we tried. Aroma pure and pleasant.

Cola Cola. Very successful taste of Coca, also one of the best. With pleasure "smoke" even those who do not drink Cola, saying what to smoke more tasty!

Mint Mint. Also successful and popular taste. It is impossible to compare to menthol. Reminds taste of a mint chewing gum like Orbit rather. Fragrant and not persuasive.

Strawberry Strawberry. Fragrant and tasty cheesecake. Not too persuasive not too sweet.