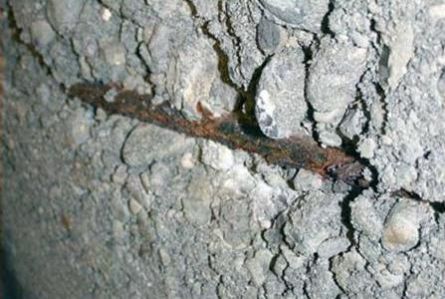 Means of protection of concrete and stone surfaces from corrosion


Now one of the main problems of municipal and industrial sewer economy is protection of collecting pipes at insufficient airing which are exposed to specific manifestations of corrosion:

the hydrosulphuric chemical corrosion striking metal and, in particular, fittings of a reinforced concrete design.

Except the specified types of corrosion, there is purely mechanical attrition of tray part under the influence of the firm particles which are present at sewage. Hydrosulphuric biochemical corrosion is most dangerous to reinforced concrete designs. Its essence is that hydrogen sulfide, leaving in a surface zone of a collector and reaching crude surfaces, will be transformed by action of bacteria (tiobatsilovy microbes) to sulfuric acid that in a combination to decrease in values rn wall slime to 1 - 3 causes extensive destruction of concrete to a condition of an incoherent ettringit.


Our material well proved as a waterproofing chemical protective layer in collecting pipes, settlers, channels, sand traps, treatment facilities of the sewerage. This material is applied already many years as additives in solutions to production of couplers and coverings. Also it is applied as an additive in plaster solution on such objects as tunnels, adits, the subway. Material is applied generally with two ways, an airless dusting and a manual way (the roller, a brush).
Contact the seller
Means of protection of concrete and stone surfaces from corrosion