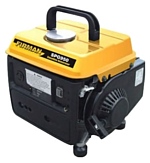 Minipower plants in the Karaganda region

As kernel of any minipower plant (also as well as the generator unit) the engine acts. In other words the engine is a unit generating which part the petrol or diesel engine, and also the electric generator is. The design consisting of the engine and generator is fixed by shock-absorbers on steel base; they are connected directly among themselves. The engine is equipped with many auxiliary systems for stable work of minipower plant.

Manual, autostart or by means of an electric starter start of the engine which functions from starter twelve voltaic rechargeable batteries. In the engine generator unit the asynchronous or synchronous brushless self-excited generators are used. In minipower plant means of automatic equipment (or automatic equipment block) and a director's console by means of what occurs can be mounted

continuous monitoring of station, management, and protection from avariynoopasny situations. Extremely simplified operation principle of mini-power plant in brief can be explained approximately so: fuel in the motor "turns" into rotation of a shaft, and the rotor with the generator connected with an engine shaft according to the Faraday's law turns turns into alternating current.

We recommend to see
Generators petrol
Minipower stations
Send inquiry
Buy
Contact supplier
Your question has been sent successfully
Consultants of the shop typically answer questions during the day.