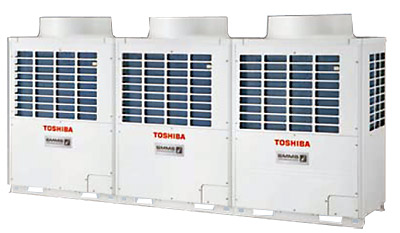 Multizone VRF the SMMSi Toshiba system - 3 compressors in the block

New two-rotor compressors of a direct current and vector invertor management allow the new SMMSi system to reach COP effectiveness ratio, highest in branch, = 6,38 (at 50% to loading).
Refrigerating capacity of systems is from 14 to 135 kW.
The maximum distance between blocks of VRF system reaches 235 meters (former systems have only 175 m).
Toshiba SMMSi is ahead of competitors on the most admissible height difference between internal blocks - to 40 meters! The system is capable to condition the 11-storey building completely.
Dimensions and mass of Toshiba SMMSi are at 40% less, than at blocks of other systems of the same productivity. It allows to project central air more flexibly, and to establish it easier and quicker.
For new generation of the multizone Toshiba systems created the new program of selection and design.
Contact the seller
Multizone VRF the SMMSi Toshiba system - 3 compressors in the block