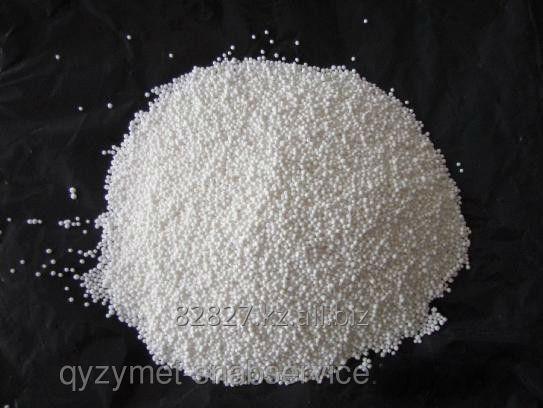 High - speed nitrogen fertilizer for any cultures. Strengthening of growth of plants

Ammonium nitrate - a chemical formula - NH4NO3. As you can see nitrogen is in this fertilizer both in ammoniac, and in nitrate forms, its total contents makes 34, 6% . The industry produces ammonium nitrate in two types - in the form of granules and in the form of scales. Ammonium nitrate is very hygroscopic therefore it on air quickly dampens and slezhivatsya. Therefore add ground limestone, chalk, phosphate rock, a phosphite, i. e. the additives absorbing moisture to ammonium nitrate. The general content of the powdering additives up to 5% of the mass of fertilizer is allowed. On podsolic soils before introduction ammonium nitrate is mixed with lime, at the same time the share of lime can reach 30 - 40% of the lump of udobritelny mix. Such mix of a malogigroskopichn is also convenient for machine seeding.
Ammonium nitrate after entering into the soil is dissolved, ammoniyny nitrogen is absorbed by the soil as a result of exchange reactions, nitrate nitrogen enters interaction with cations of soil solution. In the podsolic soils which are characterized by insufficient quantity of cations in solution acidulation of the soil can be observed at the same time. The Ammoniyny part of saltpeter can be nitrified that also causes acidulation of the environment. On chernozem and other soils of a neutral and alkaline row such phenomenon is not noted.

One of the most widespread nitrogen fertilizers. Contains 34% of nitrogen (50% in the form of Nh4 + and 50% in the form of No3 - ). Receive neutralization of ammoniac acid ammonia. It is physiologically subacidic salt white or reddish, easily dissolved in water. Release mainly in the granulated look. After entering into the soil ammonium is absorbed by the soil absorbing complex that reduces its mobility, partially is exposed to a nitrification (microbiological process of oxidation of ammonia to nitrogenous acid or her is farther to nitric acid). The nitrate form of nitrogen forms readily soluble salts which can be washed away in deeper layers of earth, that is be lost. This property of ammonium nitrate limits its introduction for the main fertilizer on easy soils. Ammonium nitrate is considered universal fertilizer. It is applied in the different ways under all cultures, it is irreplaceable fertilizer for feed of winter and pro - half - internal crops and for entering into rows during crops. Working with ammonium nitrate, it is necessary to remember that this fertilizer fire - and explosive.

Calcareous ammonium nitrate - NH4NO3×CaCO3 - contains up to 20% of nitrogen. Thanks to carbonic calcium, ammonium nitrate has more favorable physical properties, than. The value of limy ammonium nitrate is that it can be applied on all types of soils under grain, forage, oil - bearing, fruit and vegetable crops, sugar beet as the main, priposevny fertilizer and to top dressing. Fertilizer has neutral reaction and creates optimum conditions for food of plants nitrogen in a zone of its introduction where the bulk of roots of a plant settles down. Limy ammonium nitrate contains magnesium calcium carbonates that is especially effective when using on sour soils.
The main way of introduction of fertilizer - superficial with seal to the soil or without seal. Under vegetable cultures bring randomly or a tape way, and also at crops/landing in small doses in rows or holes. Under summer grain the main fertilizer nitrogen is carried out before sowing shortly. The most part of nitrogen fertilizers is introduced in top dressing. Carrying out terms podkormok are defined in strict accordance with phases of development of plants.

The main introduction (under cultivation of the soil):

Feed (a dose on one introduction):

Kompaniyey QSS, LLP is offered to acquisition in different volumes ammonium nitrate in Kazakhstan. With a possibility of delivery in any corner of the country, and also with separate advantages on terms to residents of Almaty. The goods can be bought any parties, even carriage, having placed the preliminary application for volume acquisition in the remote point.

Ammonium nitrate to buy the chance from the famous Uzbek producer with whom we cooperate many years and we can absolutely warrant for its gravity in production is provided.

This mineral product is one of the most bought and applied from additives of nitric structure. With its help it is possible to increase significantly productivity, to adjust the vegetative mass of vegetation and to increase its mineral and vitamin and proteinaceous value. It is universal top dressing that is applied to fertilizers of the soil, fruits and as an auxiliary component for other structures.