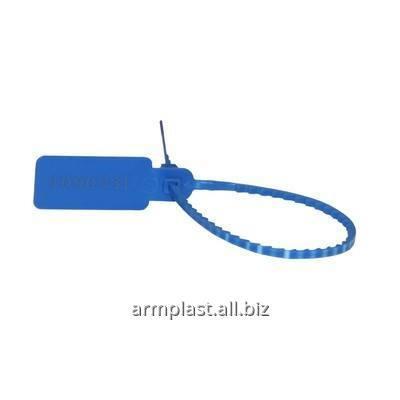 Number plastic seals of UP-165

Are applied to sealing of the objects equipped with eyes, are made of PVC of materials (polypropylene with a nylon insert), and do not demand extras during the sealing and removal.
The lock mechanism the plastic petal grip is reliably protected from direct access that makes impossible opening of a seal without visible damages it guarantees control of access to material values at any stage at their storage and transportation.

Number seals of UP-165 are made of polypropylene. The seal is designed in such a way that its flexible element (tail) is much thinner than a body that allows to drag without effort a seal tail via the lock. As approaching the lock the tail of a number seal of UP-165 becomes wider that excludes probability of its change near the lock in the conditions of low temperatures. The drawing of a tail of a seal via the lock is also promoted by special notches. The arrow put over the lock informs from what party it is necessary to implant a seal tail.