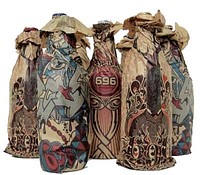 The key aspect of our activity is directed to the cultural rest in public places allowing to respect as much as possible all social ethical standards and rules conventional around the world. In other words it is possible to tell that the ban on drinking of beer does not forbid the fact of possession of beer or "the stay in an alcohol intoxication which is not offending by the type of other citizens" what corresponds to the legislation of many European countries and the USA.

Speaking to the point to drink on the street of beer and not to fall under possible penalties is, for a long time introduced around the world, paper package for beer - Birpak

Our production is a fertile field for advertizing. Why? Pivpak - a package for beer - together with its contents in the consumer's hands, can be till 30 minutes. Just that maximum interval of time for which average beer capacity can be devastated. How many times the consumer will pay attention to the advertizing placed on a beer package? Not one ten times! And it is essential, unlike the same leaflets and flyers distributed on the street, casually examined and remaining in the consumer's hands no more than 3 minutes.

As well as any company, we are interested in expansion of geography of sales of our production. Therefore we invite Everyone to be engaged in advance on the Kazakhstan market "Paper packages - Birpak".

To dealers - special conditions and the prices.
Contact the seller
Paper package