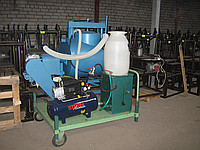 In stock
Reconfirm the price with seller
Stroitelnoe Oborudovanie, TOO
Kazakhstan, Almaty
(View map)
Call
Products of other enterprises
Description

Foam concrete and technology of its receiving are known since the end of the 19th century. It was for the first time received in Germany when mixing cement and limy solution with bull blood (a prototype of present proteinaceous frothers). Was not widely adopted because of small availability and high cost of such frother.

The rebirth of foam concrete fell on the 30th years of the 20th century when foam concrete managed to be received by means of "a soap root" - the flower plant containing a large number of saponin (a saponina - natural frothers). But foam concrete was not widely adopted again. World War II, cheap energy carriers and universal instability of post-war years made the business.

In the 60-70th years foam concrete began primenyatya and in the USSR. Mainly foam concrete of autoclave curing gained distribution. However its distribution was limited to construction of several large plants. Further because of a number of the bureaucratic reasons, and also the low cost of heat carriers (because of what there was no big economic benefit from use of the heatpreserving materials) - its wide circulation was suspended.

At the end of the 20th century rapid growth of energy costs and development of construction branch led to opening "new" again, and it is rather "the foam concrete which is well forgotten old". At first in Europe, and by the beginning of this century - and in Russia.

Foam concrete is, as a rule, applied in the form of foam-concrete blocks, or "foam concrete blocks". Technologies of monolithic filling of teploizolyatsonno-constructional material in removable and fixed timberings are also widespread. Extralight foam concrete is usually used as a durable and eco-friendly jellied heater.

Leaders in production of foam concrete are such European countries as Poland, Germany and the Czech Republic now.