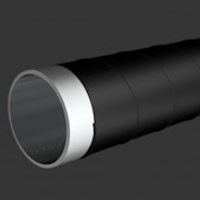 Protection of pipes against corrosion

For production of pipelines of different function steel pipes are used. Steel possesses all necessary set of characteristics, however has one essential shortcoming - it rusts. Any pipeline, not very well, is laid it under water, underground or on a surface, is exposed to influence of hostile environment. Without acceptance of necessary measures of a pipe will very quickly rot through and all system will fail that will cause heavy losses.

To protect pipes from corrosion, and to respectively increase the term of their operation, it is necessary to isolate them from external environment. Depending on conditions of use and a way of laying of the pipeline, pipes with various degree of protection are used: the normal, strengthened and very strengthened isolation (VUS).

Unlike other types, pipe VUS is intended for operation in the most difficult conditions. Such waterproofing has to not only exclude hit of moisture and oxygen on a pipe, but also protects it from external mechanical influence.

For a waterproofing of steel pipes, mainly, bituminous mastics were used earlier. They were put with several layers. To provide high mechanical durability between bitumen layers the pipe was wound with the reinforcing material. However such technology has many serious shortcomings. First of all it should be noted that mastic was applied in field conditions. As a result strict observance of technology, in particular high - quality cleaning of an external surface of pipes was not always provided. The second shortcoming was covered in fragility of bituminous mastic - it in several years in a protective layer there were cracks caused by temperature differences or ultra - violet radiation.

Modern pipe VUS considerably surpasses the predecessor in quality of isolation, reliability and durability. Its production is carried out in shop conditions where technological process is strictly observed. First of all it should be noted high - quality cleaning of a pipe of a rust and dirt - it excludes development of corrosion under isolation and guarantees reliable coupling of an external waterproofing course.

As a waterproofing extruded polyethylene is used. It is cast over a pipe by a thermoshrinking method directly at an exit from a ploskoshchelevy extruder that provides the best coupling with a metal surface. Material has the high durability, resistance to ultra - violet radiation and absolute tightness. For giving of bigger durability and resistance to mechanical loadings (for example, at friction about soil at fluctuation of temperatures), polyethylene is applied in several layers.

The tape and polymeric method is also widespread. This technology provides use of a polymeric tape with a sticky basis instead of extruded polyethylene and can be applied to isolation of pipelines directly at a stage of their laying.