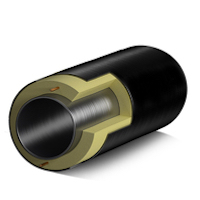 Pipes in isolation PPU in PE or OTs to a cover

Pipes in isolation PPU in PE to a cover

The pipe the isolated PPU is an innovative product which already managed to prove the efficiency during the laying and operation of pipelines. Pipe PPU in a polyethylene cover is intended for laying in a trench without installation of drainage trays.

The product consists of four main parts: the internal working pipe made of steel, a polyurethane heater, the SODK system and an external polyethylene pipe.

The main advantage of a pipe to the cover isolated by a polyurethane sealant in PE is that for its laying it is underground not necessary to prepare special drainage trays - the pipeline is laid directly in the dug trench. Thanks to it the cost of installation works, and also time of their performance are reduced by 20 - 30 percent.

The polyurethane sealant became the second powerful advantage of a product - it possesses excellent operational characteristics. Material practically does not absorb moisture, does not lose the qualities over time. But the most important is the fact that PPU has low heat conductivity thanks to what losses of heat in the pipeline do not exceed 2% .

Thanks to SODK the problem of timely identification of damages of the pipeline and determination of their coordinates is solved.

Pipes in isolation PPU in OTs to a cover

Pipe PPU in OTs is intended to a cover for land laying on support. It is made on perfectly proved "pipe in a pipe" technology - the internal steel pipe is inserted into an external galvanized pipe. Between them centralizers are established, SODK is laid, and all space is filled in with a polyurethane sealant which quickly foams and strongly connects internal and external covers.

Application of a steel pipe in OTs to a cover has a number of advantages: