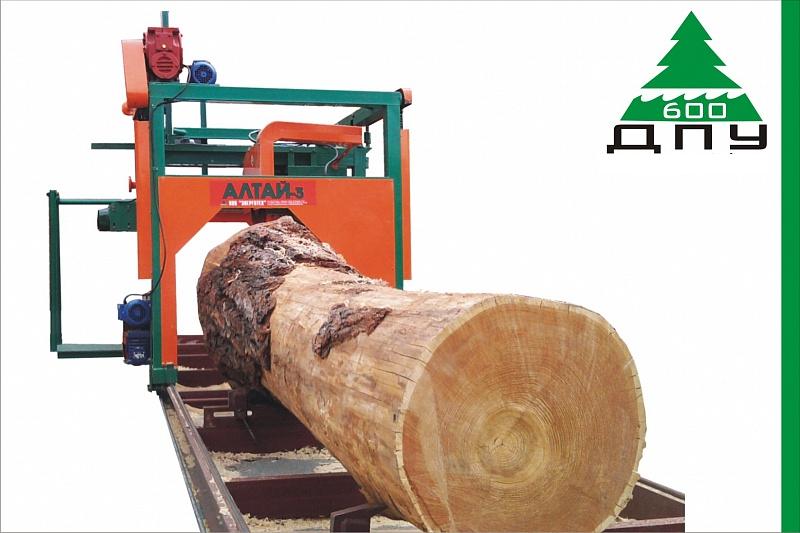 The power-saw bench of an angular pileniye (angular disk power-saw bench) makes sawing up of a log two saw disks. The block of the saw disks located at an angle 90 concerning each other mounted on the saw carriage can move together with the carriage in the horizontal and vertical direction concerning a log.

The sawlog is fixed on the directing rails by means of maple clips. On the uglopilny machine sawing up of each log is made for one installation without kantovaniye. In the vertical plane the carriage moves on portal rolling pins by means of the chain mechanism and the electric drive with a possibility of manual operational development of the size. Specially mounted cabin allows the operator to move together with a power-saw bench at sawing up of a log. After installation of a sawlog on guides, the first pass the lyska then the log is sawn on cut timber (boards, a bar) is removed. The maximum sizes of a bar which can be received on an angular power-saw bench of DPU-500 make 180х180х6000 mm, on DPU-600 200kh200kh6000mm. Movement of the carriage of an uglopil at sawing up is made by means of chain transfer by the electric drive. On power-saw benches of an angular pileniye there is no "single" reverse motion as the full cycle of sawing up of wood is carried out, as in direct, and in the opposite direction the movements of the saw carriage. When processing a sawlog on the uglopilny machine, height residual gorbylya makes 90 mm. On a power-saw bench completion gorbylya on a cut and not cut board up to 30 mm thick is possible.

the become not cut boards, in process of their accumulation it is possible to okromit for several passes.


Power-saw benches of an angular pileniye were widely adopted around the world. The technology of an angular (orthogonal) pileniye allows to make a radial cut of boards. Such type of boards is often applied in production of a glued bar, wooden furniture, windows, doors and other. The price of a radial board differs by 1,5-2 times. The radial board is in great demand in Kazakhstan and abroad.

We recommend to see
Power-saw bench
To Compare the Products
×