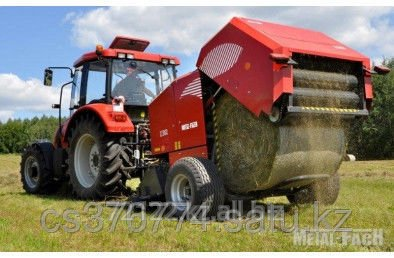 Press a sorter rolled Z 562 with a rotor and knives

Press a sorter rolled Z562 with a rotor and knives

Z562 press with a rotor and the cutting knives of production of the Metal-Fach company is development of a press sorter of Z562 in which for the first time in the country the innovative method in production of rolled press in which reliability and high degree of density of pressing are guaranteed by absolutely valtsevy chambers was applied. Thanks to this decision we receive a silosovanny forage of excellent quality (optimum conditions for siloing).

The press of Z562 is equipped with a rotor and 13 cutting knives which allow on the best preparation of forages in the bales by increase in density of material which arose owing to cutting of collected material before pressing. The forage is prepared by pressa with the cutting knives moves and prepared easier, and also is accepted by animals much easier.
The cutting knives are individually protected from damages (from-zat springs). They can be hidden very easily behind hydraulic system.
Application of a sorter 180 cm wide increases material selection productivity, and in addition installation of the mechanism of a binding a grid increases productivity of collecting to 30%. The press, the first in the country, was equipped with the applicator for siloing of forages during cleaning.
Modern mechanical blocking of a back chamber, unlike hydraulic, does not increase load of hydraulic system of a tractor that promotes increase of productivity of the car and reduction of fuel consumption. Thanks to application of wide wheels, a press is ideally suited for works on damp soil.

Under the order of the client the press can be in addition equipped: