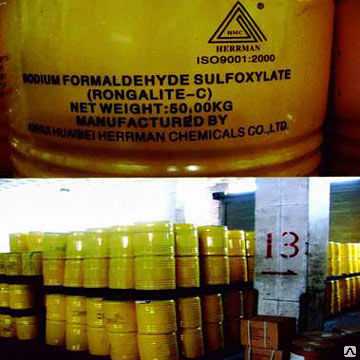 One of the latest representatives of series of compounds, being more or less difficult derivatives of hydrosulphurous acid. The last is hardly mentioned even in the best modern guides to inorganic chemistry, and meanwhile unusually strong recovery properties of hydrosulphurous acid and its salts have made it very valuable reactant in many technical processes (indigo cube, indigo printing, discharge of the paints which are not giving in to action of all other reducers, decolorization of the painted fabrics for the sake of new coloring and mn. other). However, considerable fragility hydrosulphurous kisl. and easy oxidability interfered with its application in wide sizes much. Long time of salt hydrosulphurous to. were known in equipment only in solutions and prepared ordinary just before the use by effect of zinc dust on acid sulphurous and sodium salt in strong aqueous solution on cold (cf. ) . The long - term researches executed by Berntsen and his employees at Baden aniline and soda factory have led at first (1900) to preparation of crystal gidrosernisto - sodium salt - Na 2S2O4.2H2 O, and then this salt has been received also in the anhydrous state steadier (hydrosulphite B. A. S. F. ; also eradit In). The given Berntsen's formula was confirmed now from the different parties including Muassan's synthesis (2NaH + 2SO 2 = Na2S2O4 + H2). Further researches in which also chemists of other factories (Farbverke have taken visible part in Gyokhsta, Cassell E. Tsindel in Moscow) have allowed to establish exact conditions of preparation of many firm and steady derivatives of hydrosulphurous acid; insoluble double zinc - sodium or zinc - calcium salts have been put on the market (hydrosulphite Z), but very they were forced out by the new products differing in both bigger stability, and solubility soon. These last derivatives represent compounds of gidrosernisto - alkaline salts with aldehydes. Preparation of the elementary representative of this row is reduced to effect of water formaldehyde (the 2nd pier. ) on solution of gidrosernisto - sodium salt. The structure of crystals answers formula of 2CH 2O. Na2S2O4.2H2 O. Formaldegid - gidrosulfity have been released by colourful factories under names of NF hydrosulphite, giraldit, etc. These connections are not oxidized at usual conditions of storage and are split only in the conditions of steaming or at boiling with water. The formaldehyde taken in smaller quantity (1 pier. ) but in the presence of caustic soda, has given other reaction product with gidrosernisto - sodium salt: after sedimentation the new connection which is well crystallizing which structure answers formula CH 2O. NaHSO2.2H2 O and which was given the name salt formaldehyde - sulfoksilovonatriyevoy remains alcohol of the normal sulphurous and sodium salt which is formed at the same time in solution. It is also rongalite From Baden factory. The factory product differs in purity, full stability and twice big vosstavlyayushchy action in comparison with formaldehyde - hydrosulphite. On set of properties sodium hydrosulphite needs to be considered as salt of asymmetrically constructed acid which comes from sulphurous and sulphoxylic acids through eliminating of water particle - NaOS. O. SO 2 Na; however, in detail the structure of all these connections is not finalized yet, and the published constitutional formulas express only more or less probable assumptions of certain authors. Neither H 2SO2 sulphoxylic acid, nor its salts in pure form have been still described.