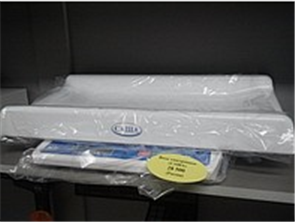 Scales of "SAShA" (for babies)

Scales electronic with autonomous food desktop for newborns (children's, neonatal) (execution with the LCD indicator) are intended to B1 - 15 - "SAShA" for weighing of newborns and babies weighing up to 15 kg in medical institutions of a pediatric profile, in day nursery and kindergartens, and also in house conditions.

The principle of action of children's scales of SAShA V1 - 15 is based on transformation of the deformation of an elastic element arising under the influence of the weighed freight to an analog electric signal. Then the microprocessor operated by scales will transform a signal to a digital form and gives result on the LCD indicator.

These scales can work both from the built - in accumulator, and from the network adapter (power supply unit).

Scales have the alarm system about an overload at indications, more than 15,045 kg.