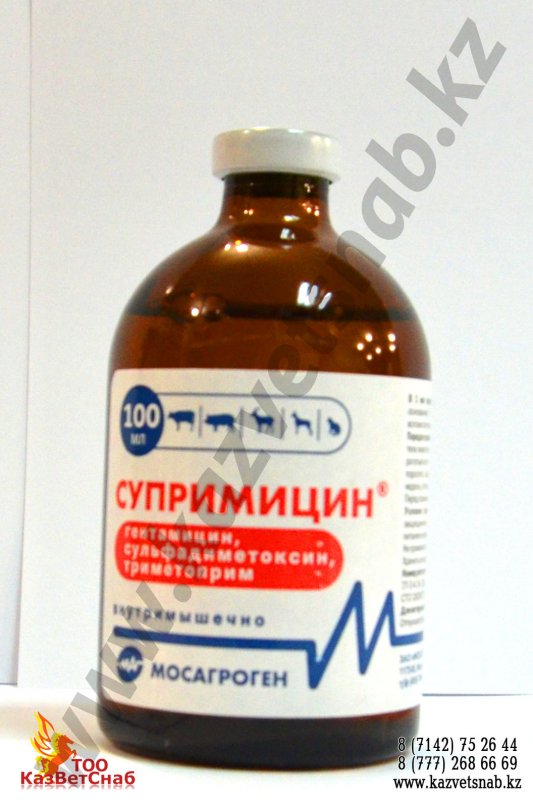 Супримицин® (Suprimycin) - the medicine containing in 1 ml of solution of gentamycin 20 mg, sulfadimethoxine of 200 mg, Trimethoprimum of 40 mg, excipients and water for injections.

Drug is let out in the form of solution for injections, packaged on 20 or 100 ml in glass bottles of the corresponding capacity. Bottles cork rubber bungs and strengthen aluminum caps. Each bottle is marked with the instruction: the manufacturing organization, its address and the trademark, the name of medicine, volume in a bottle, names and contents of active ingredients, numbers of a series, a period of validity, storage conditions, texts "For animals", "Sterilely", a way of introduction, designation of the standard of the organization, information on confirmation of compliance, number of the state registration also supply with the application instruction.

Store drug in the dry, protected from light place at a temperature from 5 ºС to 25 ºС. A period of validity at observance of storage conditions - 2 years from the date of production. It is forbidden to use Suprimitsin® after the term of its validity.

Drug on extent of impact on an organism of hematothermal animals belongs to substances moderately dangerous (the 3rd class of danger in accordance with GOST 12. 1. 007 - 76).

In special cases, according to the recommendation of the veterinarian, duration of treatment can be increased till 7 and more days.

It is not recommended to use drug an animal with a renal failure and to females in the second half of pregnancy.

Certain animals can have an irritation on site of administration of drug. In case of side reactions or an acute anaphylaxis it is necessary to use adrenaline and antihistaminic drugs in compliance with their application instructions.

Slaughter of animals on meat is allowed not earlier than in 30 days after drug phase - out. Meat of animals, by force killed before the expiration of the specified term, can be used for feeding of fur - bearing animals after heat treatment.

It is forbidden to use for the food purposes the milk received from animals during treatment of Suprimitsinom® and within 4 days after drug phase - out. Such milk can be used for feeding of animals after heat treatment.

The container from under drug is forbidden to be used for the household purposes.

Drug should be stored in the places unavailable to children.