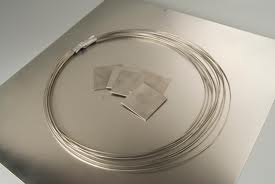 Good corrosion resistance, ability to keep a form and durability when heating to high temperatures are the reasons that titanic hire serves one of main types of semi - finished products by production of details of cases, the bearing elements in the rocket and aviation industry. Here, and also in shipbuilding such types of hire as a titanic leaf, a titanic plate, a titanic tape, a titanic foil, a titanic wire are widely demanded.

Ability to transfer influence of active chemicals and connections is led to the fact that titanic hire (for example, titanic pipes) are widely applied in the chemical, petrochemical, oil and gas industry - from it pipelines, elements of the pumps distributing and locking devices are made.

In automotive industry titanic hire is not less popular, and it is not surprising - resistance to oxidation and corrosion, hardness, elements of bearings, the bearing parts of cases, panels, etc. allow to make thermal stability from a titanic leaf, a titanic tape, titanic pipes.

Ability of titanic hire it is good to transfer various influences of environment (a rain, a hail, snow, high humidity, a heat, influence of direct ultraviolet rays, solar radiation) leads to the fact that titanic designs are used in construction and architecture. Here practically all types of titanic hire - a titanic leaf, a titanic plate, a titanic pipe, a titanic tape, a titanic foil, a titanic bar - for production of coverings of a roof, elements of a covering, partitions, dressing of facades, internal finishing of structures, and also for monuments and monuments can be demanded.

By the way, it is possible to note that the nitrated titanic alloy - very beautiful material, on its surface is formed a golden film which according to visual characteristics is comparable with natural gold.

Titanic hire differs in quite high prime cost, nevertheless, it does not influence popularity of its use: excellent operational characteristics, wear resistance, durability, durability lead to the fact that expenses pay off with interest, especially in those branches where durability of products from titanic hire plays an important role (for example, aircraft industry).