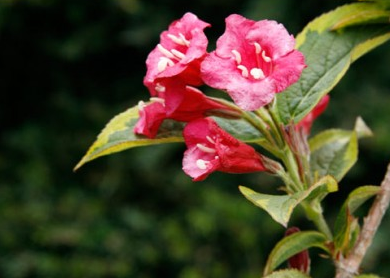 Veygela (Weigela) treats family of zhimolostny. In the nature there are 15 species of these listopadny bushes; generally they grow in East Asia.

In Russia, in the south of the Far East, three look meet: the veygela is early, a veygelamiddendorfa, a veygela pleasant.

In culture as often happens, these plants began to extend with the West where appeared at the end of the 19th century and received the name in honor of the German professor of chemistry and von Weigel's botany (1748-1831). Since then veygela won extraordinary popularity at Western European gardeners.

Two times a year - from the middle of May to the middle of June and since the end of August until the end of September - a veygela are covered in the flowers. Of course, repeated blossoming not such magnificent, as at the beginning of summer when a kustranik entirely cover red, pink, cream, white or yellow flower hand bells. And coloring changes: the flowers which only revealed - pale, but gradually they become bright.