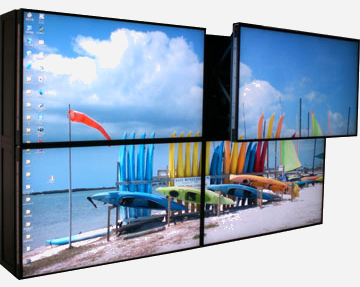 The video wall represents the uniform split screen consisting of several videos of the modules operated by the special controller. The modular principle allows to create video walls of as much as big sizes according to requirements of customers. There are video walls of tens and even hundreds of square meters. Only restriction: the sizes of a video wall have to be multiple to the sizes of video of modules from which the split screen gathers. As video of modules so-called video cubes are most often used. Recently sometimes use plasma and LCD panels of a special design to creation of video walls.

Basic Element of a video wall. Represents the uniform construct containing a projector, system of mirrors and the prosvetny intensifying screen. In essence the video cube is system of the return projection. Video cubes can have the diagonal from 40 to 100 inches (from 100 to 254 cm). However the most widespread sizes - 50 and 67 inches on diagonal. A ratio of the parties of video cubes - 4:3 or 16:9. Video cubes are designed in such a way that the screen occupies all forward panel thanks to what gaps between screens at assembly of a video wall are minimum, 1-2 mm, and are practically not noticeable on a split screen. As a part of a video cube several alarm entrances, sockets for the operating signals are provided, some producers have a built-in controller.

Depending on the used projector video cubes can have permission of XGA (1024x768), SXGA+ (1400x1050) and Full HD (1920x1080). As a rule, in modern video cubes apply micromirror (DLP) projectors. In projectors lamps with the raised service life, are applied till 10000 o'clock. In 2009 the first video cubes in which as light sources light-emitting diodes with service life of 50000 hours are used were let out. Such cubes do not demand service within the first 5 years of operation. So far at cubes with a LED light source brightness is much less, than at cubes with UHP lamps. Most likely, this shortcoming will be overcome soon.

Depending on type of object, a video wall which on them are established have a certain structure. It is defined proceeding from technical requirements and requirements of functionality which are necessary from a video wall.

The Kaz Led Media Group company has a wide experience of development, design and installation of video walls of various character for various customers. Each video wall itself in fact is the separate object demanding a competent and integrated approach for its creation. Together with it, the video wall is always included (as part of system of delivery of a video information) into structure of the project of any room with a certain appointment or the project of a network of video broadcasting. Therefore besides creation of a video wall, its correct integration into the ediniy complex project is always necessary.