ALL.BIZ Kazakhstan Kazakhstan services Real Estate Hunting and fishing goods Winterizing Thermal insulation with polyurethane foam Warming of a socle and the base of the building — reduction of heatlosses and protection against destruction 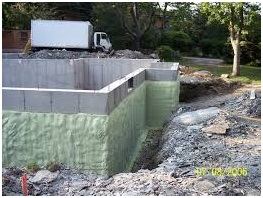 Reconfirm the price with seller
Seller
Gruppa kompanij Antares, TOO
Kazakhstan, Almaty
(View map)
Call
Services of other enterprises
Description
Efficiency of thermal insulation depends on the choice of the correct heater. Polyurethane foam (PPU) - one of the easiest and reliable ways.

Thermal insulation of the bases at construction now practically an axiom. The base - a building basis, and it is subject to rigid influence of external environment as it is underground. Efficiency of thermal insulation depends on the choice of the correct heater. Polyurethane foam (PPU) - one of the easiest and reliable ways.

The reason of universal application of thermal insulation of the base - effect of a frosty pucheniye of soil which causes sag of the base. And it conducts to a house distortion, cracks on walls and to many other problems.

Many builders in fight against a frosty pucheniye of soil still use a sandy pillow. But sand - not panacea. This soil really is not swollen out and partially helps from sag of the base, but he does not solve a frost penetration problem.

Other popular material - the extruded expanded polystyrene (EEP). And the main competitor to it - polyurethane foam (PPU). What it is better?

Thermal insulation of the EDS is a gluing in one or two layers of plates of the EDS to concrete, or fastening by means of "heat-insulating fungi" to the base. Thermal insulation of the base of PPU is a dusting of material on a concrete surface, without any fastenings. Result - a monolithic seamless covering. And this property does polyurethane foam (PPU) is irreplaceable when warming the base in conditions of the water filled soil. What occurs in such situation with expanded polystyrene? Continuous water heat exchange.

Warming the base, you warm the house in advance and save on its heating.