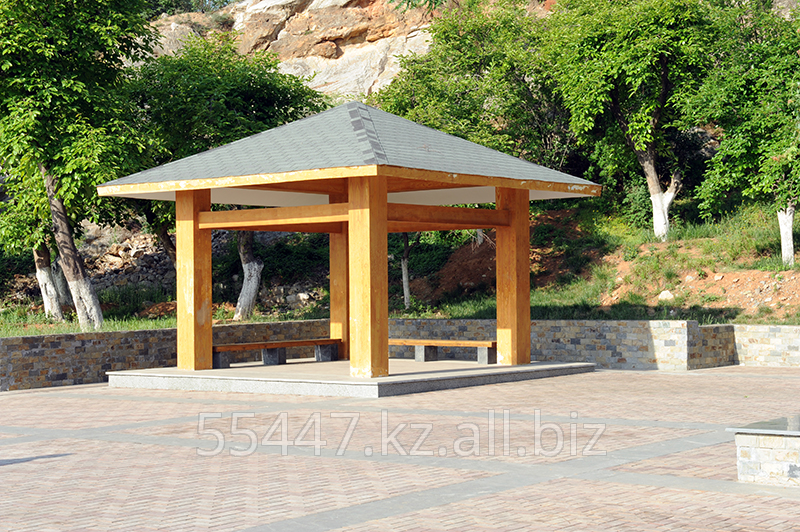 Reconfirm the price with seller
Seller
Almaty Timber Construction (Almaty Timber Konstraktion),TOO
Kazakhstan, Almaty
(View map)
Call
Services of other enterprises
Description
Pergola (ital. pergola from armor. pergula — a canopy, an extension, from armor. + regere — to send to per-) in gardening — a canopy originally from climbers for protection of pass or a terrace against the scorching sun. The support of a pergola consists of the repeating sections of the arches connected among themselves by cross bars. The pergola can be both the separate construction, and part of the building closing open terraces.

The pergola can connect pavilions, go from building doors to an open garden construction, such as a separate terrace or the pool, or to stand separately, casting a shadow on all length of a way. Can be examples of pergolas a pergola near the Chinese palace in the Top park of Oranienbaum (Lomonosov) and on Holguin the pavilion of Kolonistsky park in Peterhof.
Pergolas are more constant architectural constructions, than berso — green tunnels of gardens of the late Middle Ages and Renaissance which were often created from elastic willow rods — young escapes of a willow or hazel grove bound together around tops, creating thus a number of arches, then connected them long plates on which climbers grew. The Russian analog berso are the "ogibny roads" which had a wide circulation in the Russian gardens of the 18th century. These roads represent the same pergola, but planted trees and shrubs not by climbers, but branches of the trees or bushes planted on its sides attached to a framework. Modified pergolas are also the arbors, three-leaved mirrors and arches covered with climbers.

Almaty Timber Construction LLP suggests to make the order on production of a wooden pergola of wood of coniferous breeds of any size and complexity.