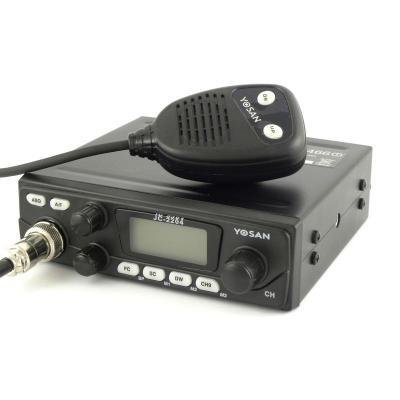 The Yosan JC-2204 Turbo radio station is analog of the MegaJet MJ-400 model and is made for the European market. 40 channels of the Russian and European frequency grid are used, the power of the transmitter makes 4 W. If necessary the number of channels can be increased to 240R+240E, and output power to 9 W. In radio station the automatic noise suppressor is realized.

The Yosan JC-2204 Turbo model is equipped with the bright display with illumination on which number of the channel, a grid, shift of frequencies, level of a signal and the included functions is displayed. Illumination of buttons of management is also provided.

Yosan JC-2204 Turbo differs in the high-precision control provided with a synthesizer of frequencies with a phase auto-adjust, the scanning mode, function of simultaneous listening of two channels, a possibility of connection of an external loudspeaker.

Range of frequencies: 26.965 … 27.405mgts
40 channels in European and Polish/Russian (shift - 5 kHz) grids (to 240 channels in the expanded mode)
Automatic noise suppressor
The output power of 4 W (9 W in the expanded mode)
3 channels of memory for often used channels
The mode of scanning and supervision over two chosen channels, the indicator of levels and parameters of a radio signal.
Large LCD display.
Illumination of buttons of management.
Scanning mode.
Function of listening of two chosen channels (DW).
Possibility of connection of an external loudspeaker.